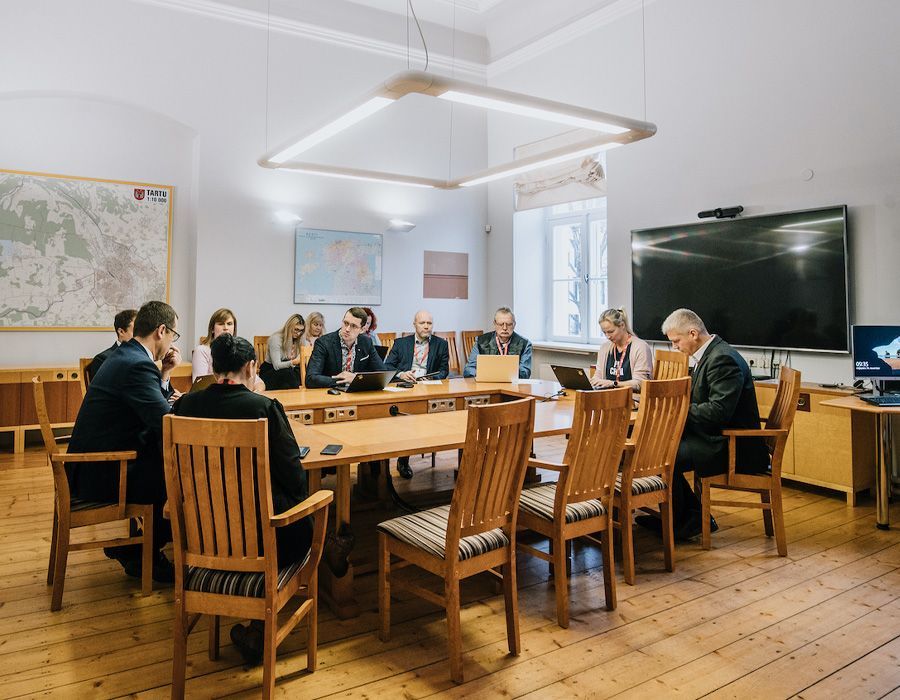 CybExer Technologies and City of Tartu together in emergency exercise

14th November, training exercise involving the City of Tartu’s crisis response team was held, in which the team coped with an emergency situation brought about due to harsh climatic conditions, which was also accompanied by a power outage and a cyber-attack on the City of Tartu’s information systems.

The exercise was carried through on CybExer Technologies STRATEX platform that we have developed for high-level strategic exercises and scenario that we prepared togethed with City of Tartu.

According to the training scenario, Tartu was hit by a major snowstorm, which caused power outages in several city districts, broke trees, and rendered a large number of streets impassable. In addition, the city government’s computer systems were subjected to a cyber-attack.

The purpose of the crisis training exercise was to practice activating the City of Tartu’s crisis response team, resolve an emergency situation, cooperate with partner agencies and providers of vital services, notify the public and resolve a cyber incident. The objective was to also test the functioning of the City of Tartu’s recently completed emergency resolution plan.

According to Mayor Urmas Klaas, the head of Tartu’s crisis response team, the training exercise was both vital and necessary. ‘During the course of the training exercise we obtained important feedback on our preparedness to cope with a large-scale crisis encompassing the entire city. For the first time we also dealt with resolving a cyber crisis incident, which is of critical importance in today’s world,’ added Klaas.

Participating in the training exercise were the City of Tartu’s crisis response team, several partner agencies (South Prefecture, Southern Rescue Centre, and Naiskodukaitse) and undertakings providing vital services (Elektrilevi, Fortum Tartu, Tartu Veevärk AS and Tartu road undertakings). A physical crisis was not simulated in the City Centre, and the activities intended to resolve the situation were played out in the workplaces of the respective participants.

Andrus Kivisaar, the CEO of CybExer Technologies said, that CybExer is happy to contribute to help the second largest municipality to exercise and test its crises response systems. “Through this exercise we are confirmed what we already knew, that STRATEX platform is ideal for simulations not only for larger structures and organisations but also very well applicable in municipalities. It helps to find the weak spots of the crises management structures and improve cooperation between the players who have to work during the crises and secure the safety of civilians,” Kivisaar said.